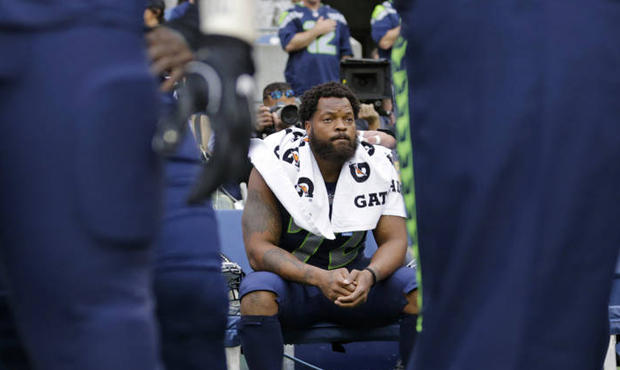 By now everyone has heard about or seen the video involving Seattle Seahawk player Michael Bennett. The video shows Bennett being detained by the police when he has not committed any crime, the only thing he is guilty of is being black. Bennett describes how he was forced to the ground, had a gun pointed at his head, and threaten if he did not follow the police orders.

One of the arguments presented against Colin Kaepernick when he was protesting was that as a rich, famous athlete he is subject to this type of behavior from law enforcement. The arguments were basically why do you care it will never happen to you. With this incident involving Michael Bennett that argument is thrown in the garbage where it should have been from the beginning.

All these recent incidents with police killing black people, the police brutalizing minorities and wrongfully arresting minorities are not something new. The masses like to believe these incidents are outliers but in the black community, we know these are everyday occurrences. The videos are just allowing the world see a small snippet of what we go through in America. Even with these videos there has still been no justice for the victims. What people have to realize the amount of incidents that are not caught on camera and the number of years we have been experiencing these atrocities.  There are numerous organizations such as the Innocence Project who have been getting wrongfully convicted people out of jail. Wrongfully convicting someone is police brutality. Shaun King has written these wonderful article exposing a corrupt police precinct in the Bronx.

No matter how rich or famous one becomes they will not be able to avoid the black experience if he or she is black. Michael Bennett happens to be one of the professional athletes who uses his fame to speak out on these issues, I believe this experience will be additional motivation for him. And Mr. Bennett I am ready to fight with you.